This year seems to be a time of changing my mind about things. I’ve begun to really appreciate some smaller loudspeakers, I’ve gained a real appreciation for high-end power cables, I’ve learned to appreciate sipping whiskey, all kinds of things, but then… this new pair of speakers come along. To be honest, I’ve never been a fan of self-powered speakers, whether they be monitors, or larger PA speakers. Even my own studio’s nearfield monitors are the passive variety. Then, I met these very  nice gentlemen from Canada, and the Kanto company (and aren’t all Canadians inherently very nice?), and they showed me a speaker that has had me changing my tune about yet one more thing.

We were heading down the aisle of the AXPONA show in Schaumburg, IL in April when I first heard and saw these speakers. I struck up a conversation with a couple of the guys there, who began showing me the full product line. My eyes and ears settled upon a bamboo set of the YU-6 speakers, and my curiosity was piqued. It was somewhat noisy on the floor there at the show, but I was already impressed with what I heard, and certainly with the feature set. They offered to send me a demo set so that I could hear them in a more proper environment and review them in my studio, and my curiosity was so high by this point that I was eager to do so. 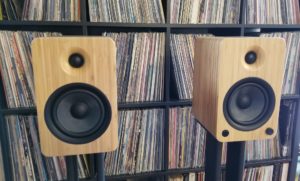 The greatest thing you’re getting with the Kantos is a true all-in-one solution that would be great for an instant small system on a budget. The input options are staggering. I mostly used the analog RCA stereo inputs from my Rotel 955 CD player, but there were much more inputs to experiment with. How could I not? These speakers are just too much fun not to. What people will find handy is the 1/8” stereo input for phones, iPods, and such. However, I think the big selling point on the Kantos is the phono input. Yes, you can run a turntable straight into them. You just know I’m going to play with this! More on this later. There is also an optical input and built-in DAC. Since my phone is my pocket, I will also experiment with Bluetooth feature, since I believe this is going to be a common feature people will lean on with these speakers. If you look in the photo, you will also notice a subwoofer output. I did not use this feature, and instead I chose to listen to these speakers all on their own.

Listen I did, which is what I know you’re wanting me to get around to here.

Like any speaker, I initially found two things. First, the Kantos do require a burn-in time. Right out of the box, they were a bit stiff sounding, but really began to open up after some playing time. Second, they are sensitive to placement to get the best results. Each speaker (the powered one, and its passive partner) have large bass ports in the rear. This means they need decent space from the wall to properly breathe. Kanto supplies just the right amount of speaker cable to be able to space these eight to ten feet apart. At that distance, they have some wonderful imaging and spaciousness. I found that they excel particularly well at reproducing vocals and percussive instruments. They are not particularly bass-heavy, but if you like more thump in your music, the bass can be adjusted via the supplied remote control, or a subwoofer can be added. I actually found that just bumping the bass up two clicks on the remote provided more than enough low end. The treble can also be adjusted to taste in the same manner, which some may want to do, as these are a more mellow speaker in the default flat setting. For test purposes, I left them flat, though.

My initial tests were done playing several favorite discs in the Rotel, finally putting them through their paces with a little Dead Can Dance. The myriad of instruments came through clearly, and with a large soundstage. Again, the vocals are where the Kantos really shone.

Now, the part I’ve been waiting for… vinyl! As soon as I found out that these had a phono stage, I knew this would be an important part of my test. Once I was really satisfied with placement, CD testing, and levels, it was time to hook up a turntable. I decided to use my vintage Rotel RP-1100Q with Grado cartridge, and fished though my collection for Emerson, Lake, and Palmer’s Brain Salad Surgery album. I figured this would a suitable test for the Kantos.

Instantly, I’m impressed, and see right away what their ultimate purpose is. So many people are either getting into vinyl for the first time or are setting up small second systems with just a turntable. I believe I have found your winner here. The YU-6’s phono stage is very smooth, and it still projects all of the imaging and large soundstage that I was hearing from CD. In fact, the soundstage might almost be a bit bigger, though I credit some of that to this album. Greg Lake’s acoustic has fantastic depth on “Still, You Turn Me On,” and Keith Emerson’s furious keys have been pounding furiously throughout this whole record. Carl Palmer sounds huge in my listening room, even from a small pair of powered monitors. 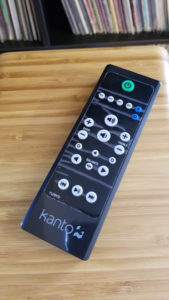 Even though this is an audiophile page, I promised I would play with the Bluetooth feature of the Kantos. Pairing was an instant breeze from my Samsung Galaxy. I decided to play Gravenhurst’s “Black Holes in the Sand” from my music library. I won’t lie, to me it sounds like Bluetooth. It’s nice, and I know that people will use this feature a lot, but after listening to a good CD player and turntable through these, it just sounds like… well… like a cell phone would. But like I said, it’s certainly a breeze, and a handy feature. I think I’m going back to vinyl now!

In conclusion, the YU-6’s were just a lot of fun to have around, and the bamboo cabinets are remarkably attractive. They are offered in several other colors, too, but for me, the bamboo was the clear choice. These do not come with grills, so you’ll want to keep them out of reach from small fingers that like to push cones in. If you’re placing them on a desk or credenza, Kanto offers great little stands that angle them up slightly. For my purposes, I placed them on conventional speaker stands. All of the Kantos speakers are heavily feature-laden but have the sound and quality to back them up. Moreover, the YU series work great with any turntable, making them a fun addition to any blossoming vinyl aficionado’s home, or for that office system you’ve been thinking of putting together. A big thank you to the folks at Kanto for letting me evaluate these speakers- it was a real pleasure!