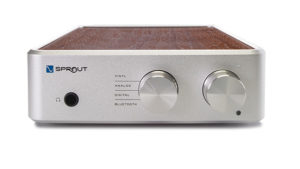 I first saw the Sprout 100 at the AXPONA show in Schaumburg, IL. Something about it immediately called to me. It wasn’t simply that a high-end company was offering such a crafty little piece at a $599 price point, but there was actually something about the Sprout itself that beckoned me. Cosmetically, it’s a bold choice in 2018, with the elegant silver set off with a woodgrain veneer top. By now, you know what a vintage gear hound I am, and this immediately appealed to me on so many levels. In the mingling crowd, it was somewhat difficult to really hear everything that it was doing at the time, but I could hear enough, and knew I liked it.

I went over and introduced Amy and myself to Bill Leebens, who turned out to be one of the friendliest gentlemen that I met at the show. Immediately jovial and courteous, he was more concerned with handing us chocolate bon bons than talking shop, but somehow my excitement won him over and we talked about the Sprout. I finished my piece of candy, and Amy took the wrapper from my hand and turned to throw them in the trash. He jokingly reprimanded her. “Don’t mother him!”

It was then that we were joined by John Atkinson, editor of Stereophile Magazine, who was about to give a presentation. I was now a very little guy amongst very serious company standing there with Bill and John, and yet they remained two of the easiest people to talk with. John ran off to his presentation, and Bill and I concluded our business. 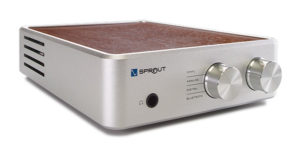 A month later, to my delight, the PS Audio box arrived on my doorstep, and it felt like Christmas for me. Even though this is here for such a limited time, what a gift. The Sprout 100 is packaged very well, with a couple goodies to enhance the experience. The remote control is quite simple with only four buttons. There are banana plugs included in order to accommodate many different types of speaker wire, but I found that the Audio Arts Classic Series speaker cables I’m evaluating fit right into the jacks without having to use these.

I’m well aware that this piece of gear wants some time to burn in, but let me tell you, the sound right out of the box is absolutely stunning. Channel separation and imaging are superb. I am running the Sprout with my Mission 771 satellite speakers, and utilizing the built-in subwoofer output to my Canton sub. The balance is just sheer perfection. I will (impatiently) give this adequate burn-in time, but will no doubt be enjoying it the entire time. So, I’ll put down the computer for the moment, and just listen… 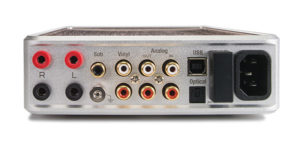 There has now been adequate burn-in time, and the results are simply amazing. The sheer space that this little amp creates is inspiring. I’m listening to my favorite Blue Tofu test CD right now, and the placement of voices and instruments throughout the room is jaw-dropping. In track 7, “Gabriel,” I can hear the subtleties of Andrea Mathews’ voice and breathing like I haven’t quite heard before. Mind you, this is just from my little Missions, not even from my big Klipsch towers. The detail and depth are just striking.

It’s still the channel separation and imaging that is grabbing me hardest. I can’t lie to you and say that this is the perfect listening room, but the Sprout 100 makes it sound like it is.

I switch over to something more challenging. It’s time to throw some Dead Can Dance into the system and really do some serious listening. It’s my job as a writer to pull you all into the experience as best I can, but this is one of times where I wish I could literally pull you all into this room. I’ve never had this disc startle me. I turned around because one of the voices came from behind me. This is two channel that I’m listening to. The Sprout has opened up the soundstage so wide that it played a ventriloquist act. I’ve never had a piece of gear do that in this room. The second track sounds like a drum circle in the room. This isn’t about specs and numbers, this purely about the presentation of music, and this is happening in front of me in breathtaking fashion.

One of the things that grabbed me instantly about the Sprout 100 was the inclusion of a phono stage, and I’ve been anxious to play vinyl though it. As I switch over to my old Rotel RP-1100Q with Grado cartridge, I’m greeted with rich rewards. I did have to run the volume up quite a bit to get the volume matched to where I was with the CD input, but I’m not concerned at all. It’s a vintage turntable. Lately, I’ve been on a Robert Plant solo kick, so I’ve thrown on “Shaken and Stirred,” side two. There’s a tremendous amount of detail in this record, and the Sprout is handling it beautifully. The first track of side two, “Little by Little,” has just the right amount of punch and depth without getting too heavy. The bass guitar, crucial on this song, comes through and sits perfectly in the mix. Nothing is lost here. As it was with CD input, the Sprout makes this sound much bigger, and makes this room more alive than it even has a right to. Channel separation is still just as fantastic, and the soundstage is wide.

The album gets punchy and dancy in the next track, with castanets that burst over heavy guitars. The clarity and purity I’m hearing here is just beautiful. Layers of vocals are reproduced with ease. In the manual, PS Audio boasts about their “world-class RIAA phono stage,” and I’m here to back them up on it. Well done, folks!

This also has a Bluetooth function, which I’m generally not a fan of in audio gear, but it’s a hot feature for people, so I will test it out for you. It paired fairly easily with my Samsung Galaxy S8+. Be prepared- it came in hot! Bring the volume down first! Once at a more appropriate level- wow- this is actually quite impressive. I was expecting the typical cell phone sound as I played some mp3 tracks from my library, but to the contrary, the sound was full and rich, and still had the characteristics that I love about the Sprout. Try this one on your friends. They’ll be amazed, and mad, and then amazed again. “That’s coming from your phone?”

I did enhance the overall experience in two ways. As I mentioned earlier, I had the benefit of the Audio Arts SC-5 speaker cables in this evaluation. These performed wonderfully with the Sprout 100, and integrated perfectly with the jacks in the rear. I also upgraded the included power cable to the Audio Arts Power 1 Classic AC cable. (These will be reviewed next month.) I found that these upgrades opened up the soundstage even further over the stock cable.

I’ve had some pieces of gear come through my home that I’ve wanted. Some I’ve plain lusted after. This is one I know I’m going to own. I can’t possibly recommend this little beautiful piece of audio glory any higher. If I had a “Shoestring Audiophile Award” to give, this would take the honors. Thank you to the folks at PS Audio for your generosity and your graciousness.