The most difficult part about spending an entire day at AXPONA, the high-end audio expo, is simply getting spoiled by all the incredible gear. It’s like going to open houses in rich neighborhoods. No matter how nice your house is, you’re going to come home a little disappointed.

Such was the case back in April as I went downstairs to my shop and switched on my little two channel listening system. I love this system, and its simplicity. A Rotel 955 CD player, Denon preamp, Integra ADM power amplifier, a Canton sub, and my Mission 771 speakers. But, in my haste of putting it together, I used what I had handy at the moment- a couple cheap interconnects, and basic 16-gauge spool speaker wire. It was fine. At least… it had been. Now, I was terribly disappointed in what I was hearing. My heart just sank.

Hope was sitting on my coffee table.

The folks at Audio Art had just sent me a box of cables to evaluate, and this was the time to put this all into action. There were several different cables for me to test- an interconnect, a pair of speaker cables, and a power cable. I was very excited.

Back to my little two channel system. The first thing I did was dig up some better interconnects that I already had. That made an immediate difference. I was pleased, but the sound just wasn’t there for me yet. I reached into the box and pulled out the Audio Art speaker cables.

First impressions before they were even installed were that these are well-made cables, but nicely flexible. Thick and solid, with very nice jacketing. But… it was the sound that got me right away.

So, let me first lay some important groundwork. I hear a lot of people defend the good ol’ 16-guage spool speaker wire as “good enough,” and I’ve heard so many of the arguments that good speaker cables don’t make a difference. I’ve even heard people go so far as to say that anything above the spool is snake oil. I’m here to tell you, beyond the shadow of a doubt, nothing could be further from the truth.

The moment I put in the SC-5 cables, the whole soundstage just opened right up. These were fresh, out-of-the-package, not even broken in yet, and everything was different. I was listening to a different sound system. So, I left them, to burn in a while… 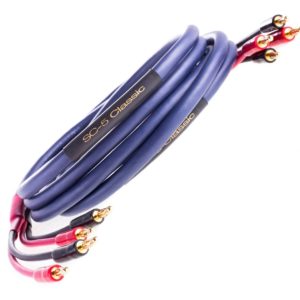 As the next few days progressed with these, they just kept getting better and better. I was hearing things in the little Missions that I hadn’t heard before. I suddenly heard much more depth and articulation. Instruments had more color and roundness. The bit of brightness that was bothering me before from certain frequencies was gone, and the sound field was smoothening out. This was only day three.

After only a couple weeks, they settled in beautifully and the two-channel system began to take on a new life of its own. It became so amazing to listen to that I found myself sneaking downstairs just a little too often.

Shortly thereafter, the PS Audio Sprout 100 showed up for me to evaluate (see last month’s review). I used these speaker cables for that also, and was blown away by the pairing. The SC-5s really let the Sprout do all the magic that it was capable of.

I decided to put these into my main system between my reference CD player, the Pioneer Elite DV-79AVi, and my Yamaha receiver. I tried to go into this without expectations, but I wondered what improvements I was going to hear over the interconnect I had in there.

The difference was immediate, and startling. It was as though someone took a blanket off the music. I played the same track and heard subtle details I had missed in the song before. The New Basement Tapes- Lost on the River has become a reference disc for me, and as I’m listening, I’m hearing depths yet undiscovered. It’s like listening to it for the first time. 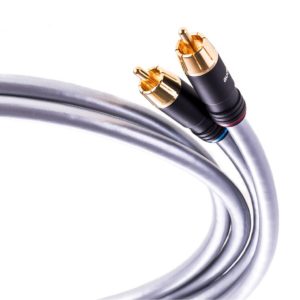 This is their “entry level” cable? Seriously? I’m so deeply impressed.

One of the most difficult things about a cable review is having attach the usual flowery adjectives to everything I’m hearing right now. I’d prefer to spare you that, and simply tell you that the additional depth and color in your sound is well worth the price of admission for these wires. The jump in dynamics and the pulling back of the curtains in the soundstage should be all that is needed to convince you. 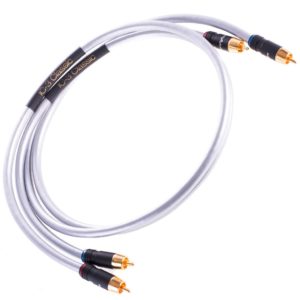 I’ve had this cable in my rig all summer and it has become quite addictive. I’ve listened to countless discs through it, each time more and more impressed by the new detail in my system.

The whole replacement power cable market has become a tricky thing. Some people really believe in them. Lots of people swear it’s nothing but snake oil. Audiophiles will swear it makes all the difference in the world, while others will argue this is voodoo and the work of charlatans. You can spend anywhere from $25 to $20,000 to find out for yourself, but I finally had the chance to do some experimenting on my own.

First, let me tell you that there is more truth to the whole power cable world that the naysayers want you to believe. Secondly, that’s not always a good thing – I have actually heard a high-end power cable absolutely ruin a system. A few months ago, I heard one that introduced shrill highs and harsh upper mids into the system and made it nearly unlistenable. So, this can be a double-edged sword. I went into this experiment a little skeptical. 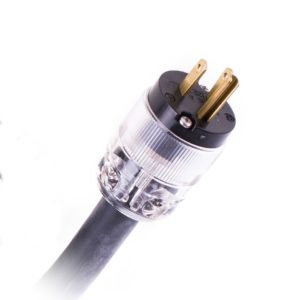 Let me start by saying that my results with the Audio Art power cable were nothing but pleasant. I used it on two different components- my Integra ADM power amplifier and the PS Audio Sprout 100. In both cases, I found that the soundfield opened up just a bit and the depth increased a bit. I do say a bit, as I found that the differences were subtle. I’ll go back to my adjective of pleasant again. I believe that there were limitations only in the gear that I was using. In a much higher-end system, the differences would have been more pronounced.

This is a power cable I have no hesitation in recommending to someone who is wanting to try this upgrade for themselves. Yes, it really does make a difference, and the folks at Audio Art make a great product with this cable.

The folks at Audio Art were a real joy to work with, and I thank them for the extended loan of these cables. It was an absolute treat getting to hear them work with so many pieces of gear over the summer. You offer an outstanding range of cables!