Amy and I were married in a private little ceremony on the beach in the Bahamas, on the most perfect day in late June. It was just the two of us, running away to the tropics, finding the most romantic getaway we could- 7 days in paradise. She was the most stunningly beautiful bride I have ever seen. I took every precaution not to see her dress, or even get a description of it, before our wedding day. When Paul McCartney’s “Maybe I’m Amazed” started playing, and her feet hit that beach, I saw her for the first time. My throat instantly closed up and my eyes filled with tears. She was an amazing sight to behold. How was I supposed to read the vows that I had written now? I could barely speak. Her radiance only grew in magnitude as she walked down the beach to the small altar and took my side in front of Rev. Franklyn McKenzie. There were just small clouds in the sky, and the water was so blue that it almost seemed illuminated. 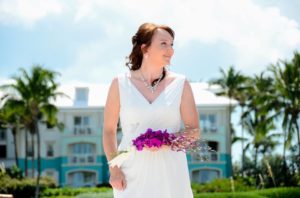 The ceremony was short and very sweet, ending with us signing the papers at a small table while I held a parasol over Amy, then with Rev. McKenzie pronouncing up husband and wife, and finally with us walking back up the beach, still barefoot, to Tom Petty’s “House in the Woods.” It was damn near surreal. 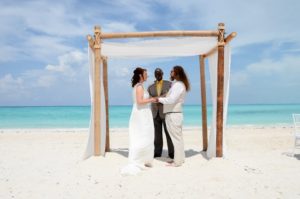 Sandals, with the help of our amazing wedding coordinator, Bradnicka, even threw us a private wedding reception afterwards. It was a great chance to get out of the heat, and into some air conditioning. They fed us incredible hors d’oeuvres, poured champagne, had us cut our cake (specially made just for us), and gave us a first dance. For possibly the first time in my life, I hadn’t a care in the world that the music was coming from a boom box. I was dancing with my beautiful wife. Nothing else was even remotely important in that moment. We danced to “House in the Woods,” which has been our chosen song all along. We were also finally starting to relax a little bit. 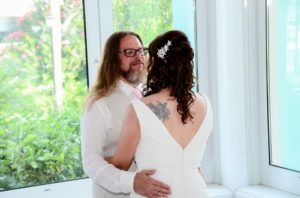 Everyone has their reasons for wanting to get away from it all. Traffic, stress, jobs- just the pressures of daily life are enough to make any of us want to board an airplane for a much-needed vacation. The two of us have all those pressures, and all those needs just like everyone else, so when the time came to get married, a real escape became the obvious choice. But, as ironic as it seems, as we were escaping it all, my thoughts kept going back to some of the things that I was leaving behind. Yes, there were things I missed back home during our week of paradise. But… not many.

There are resorts and destinations that attempt to give you the comforts of home, and don’t get me wrong, that has its place too. In contrast, a luxury resort like Sandals attempts (and succeeds) to spoil you in total pampering and service. This is just pure attentiveness, 24/7. The food is all incredible, the drinks are fantastic, and you are waited on hand-and-foot by people who smile warmly all the time. There is also music all day long, and musical entertainment into the night. There are very few television screens anywhere. Everywhere we walked, island music, dance music, and relaxing sounds were piped into different zones and systems. It really enhanced the experience. There was a main stage, and other stages were set up in two different locations that week. We must have heard nearly every Bob Marley song ever released either played or performed, and it gave me a whole new appreciation for his music, and certainly reggae in general.

Our room was a straight shot across the very long pool from the swim-up tower from which dance music blared, so we clearly heard the music all the time. In other environments, this would’ve been incredibly annoying, but these were the islands, and this was island dance music. It set a great mood the whole vacation. The windows were thick enough to (mostly) seal the sound out if we needed quiet time or a nap, but we could sit out on our balcony, or open the sliding glass door and welcome it all in. 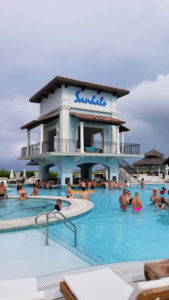 Around the resort, reggae music constantly poured out of Sonance outdoor speakers. We went for walks twice daily, on the beach and around the resort. The music served to paint the color of the day. Being 70 volt (as opposed to 8 or 4 ohm) speakers, they of course lacked some low end, but they really did have a very nice, smooth sound. I was fairly impressed.

There were more peaceful zones to the resort, such as the Quiet Pool (where we spent several afternoons with books and infused water) and the Zen Garden (where our wedding photos were taken). In those areas, they had some Bose omnidirectional speakers, but I don’t recall ever hearing anything coming from them. I would’ve liked to have evaluated them a bit. 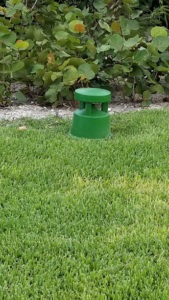 There was a main stage where they had live reggae music one night. This indulged the part of us that was missing live music back home. Sandals brought in some really top-notch musicians for the live show, though the sound system was not up to par with their talents. I think it had as much or more to do with the mix than the speakers (which were hard to identify). However, it didn’t take much away from being a really fun night of great reggae music! 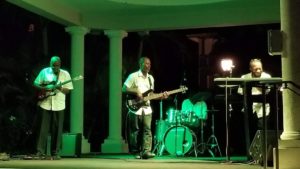 Our favorite hangout was the British pub, called the Drunken Duck. Besides being the only place that served Guinness, they had the best in late-night food and entertainment. I might have been guilty of karaoke once during the stay. Our favorite waitress, Major, worked there most every night and was one of the highlights of the trip. The speakers in the bar were covered by metal grates, so I regret that I can’t tell you what they were, but the sound was pretty decent for a bar system. 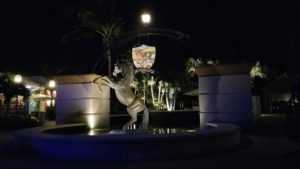 Sandals did everything to cater to our every need, and whether by design or by accident, they did end up catering to our audiophile whims enough to make the experience even more memorable. I’m sure that people must have thought I was out of my mind as I was crouching down to take photos of outdoor speakers, and I wanted to explain that I was an audio writer, but… sometimes it’s more fun to leave them guessing. It is absolutely a place that we will go back to, to immerse ourselves in the luxury, the food, the culture, the warmth, the tropical breezes, and of course, the music! Since we have our nuptials out of the way, next time will be even more relaxing.

3 thoughts on “Getting Away From It All”