Recently, I was invited to join the Chicago Audio Society. I did so with a little trepidation, knowing that I was likely going to be joining in with people who were out of my league… but their president, Rich Sacks, assured me that I would not be the most “shoestring” guy in group, and that all budgets and levels were represented. I’ve never been part of something like this before. My hi-fi experience has largely been a personal one, or one shared with some friends. Now, I’ll be in rooms with people engrossed in the hobby. That sounds fun on the surface, but audiophiles can be some of the most critical people I’ve ever met. Still, I’m excited to see what all is in store.

February 18th marked the first opportunity for me to attend a meeting. For this meeting, Eric Krupp and John Brunner of Gudebrod Audio brought out some amazing gear for us to audition. Their objective was show off their new tube preamp ($7,000), and also to tout their AC line conditioning products, which were all falling well under a grand a piece. But my eyes widened as I spied the Sonus Faber Olympica loudspeakers they were running. Powering the whole works were a gorgeous pair of Audio Research 100 watt tube monoblock amplifiers. I knew I was in for a treat. 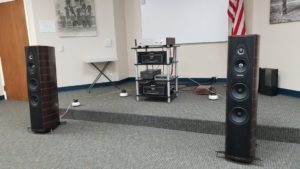 As this was my first meeting, and I already felt a touch out of place, I kept somewhat to myself to first. This is odd behavior for me, as I’m normally more of life-of-the-party socialite guy, but I’m the new kid. Give it time. Still, I think that it’s important that we venture out of our comfort zone in this life. We get too comfortable in our bubbles, and time comes to break out of them.

Demos of the gear began immediately. The sources were an industrial Pioneer DVD player, simply supplying the ones and zeros to an M2 Tech Young DAC, which I was completely unfamiliar with, but sounded quite nice. Well, to be honest, it all sounded great. The system worked so seamlessly together that it was difficult to tell which component might have been doing the majority of the heavy lifting, and what might have been the most transparent. But isn’t that the ultimate goal? Are we listening to our music, or our equipment? 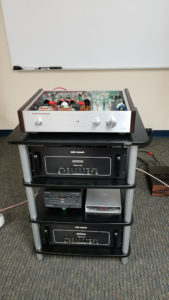 Well, in this case, I found myself listening to the equipment more than the music, to be truthful. This was due to a couple factors. First, they were playing a lot of jazz. Don’t get me wrong, jazz is fun, but it’s not what I normally dig. It also tends to make me listen to a speaker more than the music for some reason. Always. If someone puts on some smooth recording, I’m listening to the extension of the stand-up bass in the woofers, the breath of the singer in the midranges, and the cymbals in the tweeters. I completely lose the music and get lost in technicality. I hate it. And that was that majority of what they played. Secondly, I couldn’t get past the ear orgasm of being in the room with the $8,700 Sonus Fabers, and I just couldn’t get out of that headspace. I was being spoiled, and I didn’t want it to end. The sound of that Gudebrod preamp and the tube monoblocks was such pure bliss, that it was hard to get away from some of the mechanics of it. I know, that’s a little paradoxical, isn’t it? Losing yourself in mechanics?

At some point, they changed the polarity of the power conditioners, and it sent the room abuzz. There was a controversy among the members as to whether the “enhancement” to the lower registers was a good thing or not. To me, the enhancement was just that, an enhancement. Not quite natural, but I still liked it. The Sonus Fabers, as incredible as they are, are not the most bottom-heavy speakers I’ve ever heard, and the little addition to the bottom end was worth it for me. 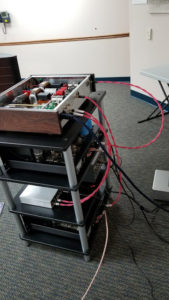 Oh wow, so would you listen to me, here? Is this really me? The Shoestring Audiophile? How does this all even relate to me? This was over $30,000 worth of sonic ear candy in front of me. So, here were my takeaways from this for you. One thing I loved is that Eric and John were about as down-to-earth as it gets. They preached about not using unattainable gear for demos. The Pioneer player they were using was right up my alley – cool, commercial, and probably something you can find out there for a song. Their power conditioning products are well within reach of budget audiophiles. They really reached out to the crowd for feedback, instead of just telling us how their products were the best. Most importantly, they treated everyone, even me, as if they were someone of value.

All-in-all, this was a fun and positive experience. I got to immerse myself in gear I wouldn’t normally wouldn’t get to hear, though I would prefer to hear my own demo selections on it, but that’s for another day. Thank you to Chicago Audio Society, Eric and John, and Gudebrod Audio for a great afternoon.