For many years, I’ve bounced back-and-forth on what my “reference” CD player has been. C’mon, haven’t we all? Isn’t this hard sometimes? If you’re like me, we end up accumulating several cool players over time. So what goes in the system as the main player? A changer? A single? What format? Oh man… the choices!

For a few years, I went between a Rotel 955 and a JVC DVD-A changer. I never ended up biting onto the DVD-A format, but the JVC is a very nice player, and I was always running digitally out of it anyway. The Rotel, on the other hand, has always been used as an analog deck to take full advantage of those amazing Philips DACS. In its price point, it’s still virtually unrivalled, in my humble opinion. And of course, in typical Shoestring Audiophile fashion, I picked it up for a song. The JVC came my way as part of a trade.

So, there I was, a somewhat content little amateur audiophile, until 2017 comes along with two new bargain players, and shakes my whole world up. Early spring, I’m walking through a flea market, and I happen across a Sony NC-555ES changer, which later casts me into the deep, dark work of SACD… this is another article waiting to happen… I’m getting ahead of myself.

But I digress. The player I’m really talking about happened in fall of 2017. I came across a seller unloading his brother-in-law’s Pioneer Elite DV-79AVi player on the local garage sale site for 25 bucks. I immediately began doing searches on this, and found huge, favorable reviews. Obviously, I put it an immediate offer to the guy, and bought it. As I was waiting for him to get back to me, I kept reading more and more on this player, and how- at the time- it was stacking up to players 3x its price.
Originally a $1,000 player in 2006, this was criticized only for its lack of ability to play the new Blu-ray format. Otherwise, it was praised, in particular, for its low-end definition. I was anxious to put this to the test.

I could bore or excite you with months of details on my experience with this player, depending on what you’re hoping for out of this. Needless to say, I’ve spent a lot of time with this player. It has even become my reference SACD player, beating out the Sony ES a few weeks ago. Everything it does, it does better than everyone else can. I’ve heard players ranging into the 5-figure realm, and I will still challenge them all with this one. It might not be a world beater, but it will hold its own against everything I’ve heard. What more can I ask for my 25 bucks? 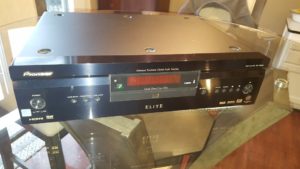 Recently, an audiophile friend of mine got me into an older CD by a group called Blue Tofu. This is a notorious test disc for any subwoofer. I couldn’t wait to get this into the system, to hear it in the Pioneer, and to feel out the Legend Audio subwoofer I’ve just upgraded to (yet another article to come). This sub is a 12”, 500 watt monster, but is still oh so musical at the same time, and I was anxious to hear the whole system now… I was not disappointed! The clarity and definition from this standard CD was absolutely outstanding, and the sub hit hard without being overwhelming. Vocals were nicely out front, and the space was defined, but open. The 24 bit 192 kHz DACs in this are truly amazing, probably ruling out my need for ever buying an outboard unit, like so many people are doing these days. 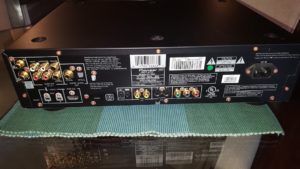 The real test came a few days later when I took delivery of Genesis “A Trick of the Tail” in 5.1 DSD SACD surround. This is where the Pioneer really got to shine. I heard things that I’ve never heard before, primarily in the lower registers. Bass was tight but had so much more definition. Everything I had read about this player was absolutely on the money. 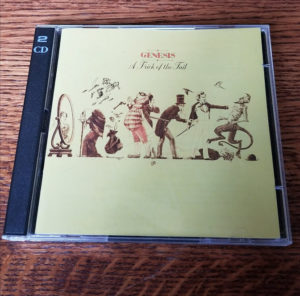 Speaking of money, I have since seen these players selling very reasonably on e-Bay. I’ve spotted a few for under a hundred bucks, even. For what you can pick one up for, you’ll have yourself a bonafide contender. Bring on the challengers, I will welcome them all! 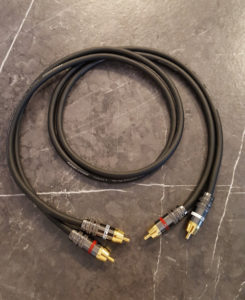 I’ve spent a couple months evaluating a value cable, and I have to report that I actually rather like it! I was skeptical about an e-Bay cable, but I gave the Revelation Echelon a chance about a year ago on one of my systems. They seemed to be a nicely-built cable that did the job quite well. After buying several, the seller asked me to evaluate the slightly upgraded Cadence II, especially after hearing about my column here. Again, I was somewhat skeptical about putting a $5 cable into my main system, but I will tell you that I’ve quite pleased with the results. Like the Echelon, it’s well-built, nicely jacketed, has solid, beautiful connectors, and a deceivingly high-end feel to it.

I’ve been running the cable between the Pioneer Elite SACD player and my receiver for my 2-channel playback. For multi-channel, I am using the Silver Series from Acoustic Research. I have found that it has been nicely balanced, with nothing lacking, and nothing to complain about at all. In fact, it’s kept up with the AR cables pretty decently. Who knew you could get that for 5 bucks? All-in-all, I’m impressed.

The cable market is a hotly-contested one, just to grossly understate that. There are lots of budget and blossoming audiophiles that either gripe about the cost of cables, or regularly ask about lower-priced ones. From this point on, I would have to point them to the Revelation Cadence II.

2 thoughts on “Bring On All Challengers- Pioneer Elite DV-79AVi”