Over the years, I’ve had several subwoofers in my main system, with mixed results. My challenge has always been finding a sub that blends in with my Klipsch KLF30 towers. They’re wonderful fire-breathing monsters, very powerful and efficient speakers that can make them picky about everything. For the price point they were built in, I will argue them as one of the greatest speakers ever produced, especially for rock and roll.

I started with an Infinity 12”, whose amp died. That sub has found new life in another system as a passive sub, and actually does better than it ever did a powered unit. For quite a while, I ran my wonderful little Aura 8”, which will definitely be the subject of another article, as it is one of my favorite pieces of gear. That little guy keeps up with anything you throw at it, and still stays very musical.

About a year ago, I acquired a beautiful Velodyne sub, and I was very excited. I’d always wanted one. It was one of their more entry-level models, but it’s tough to go wrong with a Velodyne. In it went. Immediately, I had to make adjustments to my listening environment. I needed to put felt pads behind some of the pictures on the wall to cut down on their rattle! This thing literally shook the house. Now, there was definitely a sub in my system!

That’s not necessarily a good thing, though. To me, it was always there. Always. No matter what I did. It was nice, and it sounded very good, but it was always present, and it always let you know about it.

Then, one day, I happened upon a couple subs in my local garage sale site on the cheap. Seriously cheap. A Monitor Audio and a Canton subwoofer. I made arrangements to meet up with the guy in a grocery store parking lot that afternoon to make the exchange. The Canton looked rough, and the Monitor Audio looked pretty nice, and he assured me everything worked as promised. It’s always a risk, but I was willing. I got a good feeling about the guy, which lasted my whole trip home. 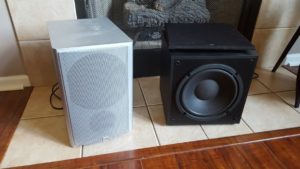 As a quick aside here, I will tell you this regarding buying things on garage sale sites like OfferUp, CraigsList, and all the others- trust your instincts. If you’re getting the feeling like you’re about to get burned, you’re about to get burned. Be careful. These are wonderful sources of finding the dream system you want, though, and you should tap them for everything they’re worth!

Anyhow, I got them home, cleaned them up, pulled the Velodyne out, and began my testing. First, the Canton. Oh, what an improvement already! It’s a much more musical sub, more subtle and linear than the Velodyne. I was excited, but I knew this wasn’t going to be my main sub.

The moment of truth was upon me.

In went the Monitor Audio. It needed very little adjustment to sit right it. I crossed it at 80 cycles, as I do with all of my subs. There is a switch on the back for selecting a movie or music mode. I started in the music mode. The magic was instant. *Poof* It was gone. Gone, as in there was suddenly no more omnipresent subwoofer. Instead, there was this incredible melding of the soundscape. It shook hands with my speakers, and decided to become one with my living room right away. I no longer had a sub. What I had was this amazing full range of sound that I had never had before. There were no peaks or valleys, no resonant tones, just music. 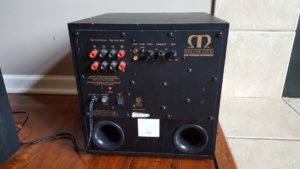 I immediately went for my test disc, Genesis’ “A Trick of the Tail.” That first big hit in “Dance On a Volcano” went through me in a way my system never had. There was a depth that went all the way to my front yard. And yet, no apparent subwoofer. The blend was astounding. It was impossible to tell where the four 12” woofers of the KLF30’s stopped, and the 10” of the ASW began.

So, up went the volume. Two tracks forward to “Squonk.” The bass line was moving, but never resonant or overwhelming. As the Klipsches brought out Phil’s descending drum run, the ASW kept right up. This is fun!

I only got about a minute into it before it was time for the real thing. I made sure the sub was exactly where I wanted it, reached over to the Sony ES, and skipped up to track 8. “Los Endos” is always my go-to for testing almost anything. This, especially for speakers, is what separates the men from the boys. Through my Yamaha RX-V757, I can drive my KLF-30’s to hit 118dB at the sofa without a hint of distortion. The Velodyne was always able to keep up with this task. Would the Monitor Audio? I was a little nervous.

I kept the grill off to monitor cone movement, ready to kill this experiment if it began to bottom out. Louder. Louder. Deeper into the song. As the song built towards the end, I went for it. The sub had found its new home, and I knew it was happy. The cone excursion was smooth and powerful, and the blend was still there. It was still one big soundscape in my living room. This was best my system had ever sounded!

Since then, I’ve tried it with movies too. Yes, I’ve engaged that “movie” switch. Ooooh, look out! Sci-fi heaven. The sub becomes a bit looser, a little more aggressive, and does take on more of a “Hi! I’m a subwoofer” kind of role. What a great thing to have. I’ve also tried about everything I can throw at it, musically, and I just continue to fall in love with it.

This begs the question then- what is it that you really want out of your subwoofer? What are these boom boxes really supposed to be doing for us? Yes, the explosions are nice, but if they compromise our musical listening experience, and don’t compliment our soundstage, then I have to question them. I’m just glad to know that there are some real alternatives for us audiophiles who do want or need a sub in our systems.

If you have a chance to pick one of these up sometime, this gets my highest recommendation!