I have a fetish, well… I suppose everyone does… but mine is for VU meters. I don’t know if it’s the hypnotizing movement, the immediacy of the information that it feeds me about my music, or the pleasure of occasionally seeing them bounce a little too high as I blow the dust out of the speaker grilles. I’ve had a fascination with them since my early youth, and had an immediate understanding of their meaning and purpose. I’m talking about those meters that read the power output of your amplifier (or sound lever on your tape deck, etc). Once a staple of hi-fi gear in the 70’s, they became status symbols on the faces of some great pieces, and have caused certain items to fall into great collectability today. Like dancing girls against stage lights, keeping time with our favorite music, they still capture us. 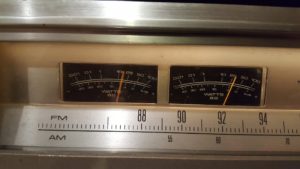 From time-to-time, I’ve been quite the garage sale hound. I should really be more of one, as I’ve made quite some great scores at them, as well as estate sales. One such morning, probably 20 years ago now, led me to stumble across this beautiful vintage Pioneer SX-780 silver face receiver. Since childhood, I’ve always been a fan of silver Pioneer equipment. I grew up around it, and would stare at it in magazines, dreaming I would own it all someday. They always had some of the best advertisements in the stereo magazines at the time. It was fantastic dream fodder for a 10-year-old boy. Now, here was one on the table in front me, for (as I recall) 20 bucks.

I brought it home, and to my disappointment, one channel had weak output. Everything worked, though. At the time, I was taking a history class with a young man who was an electronics major who asked if I wouldn’t mind letting him take a shot at it. All it would cost me was parts. I was pretty broke, and had little to lose, and couldn’t turn down his enthusiasm, so I turned him loose on it. Within a couple weeks, he returned it back to me, with the output stage as good as new, and a big feather is his blooming cap.

The receiver is sheer pleasure to listen to. I have it paired with another garage sale score (to be written about later), my 1978 Klipsch Heresy speakers. They just sit so nicely together. I also have a Legend Audio subwoofer on it, with each set of speakers run separately on A and B, so that I can turn the sub off, should I choose. This setup also allows the Heresys to stay full range, instead of being crossed over by the sub’s output. (*Note- Not all receivers are friendly to this arrangement. Your results may vary.) The sub is a beast, and more of a modern sound, so it’s in the mix very low.

The sound, without getting overly descriptive, is absolutely “vintage.” Even right now, listening to Pink Floyd’s “The Division Bell” through a Sony ES CD player, the tone is more 1978 than anything. I come to this system when I need to be transported back to a simpler time in my life, when my stereo was really the most complicated thing in my life. But, by vintage, I do mean that somehow, even with horn-loaded speakers, the sound sits back nicer than a modern receiver does to me. More rounded, somewhat slower to respond, slightly less snap, warmer, just more… pleasant. Hell, I know this chair has an ottoman somewhere, I could just listen to Pink Floyd here all day. It’s just that good.

These receivers, and a lot of silver face Pioneer gear, have achieved high collectability now, and with good reason. The beauty is timeless, the sound as well. This particular range has power that is greatly under-stated. It’s not just that the Heresys are very efficient, this 50 watt-per-channel unit will produce stunning volume in this pretty large room, and does so very cleanly. The higher models in the line have an even better reputation for doing so, and will put so many modern amplifiers to shame. They just have a beautiful sound, plain and simple.

They also had more versatility than some of their contemporaries, which also makes them a good modern choice, as well. We have the need for more inputs these days, and for those of looking to blend the vintage and modern worlds, this has only boosted the lore of this line. Unlike some of their competitors, the Pioneer gave two tape monitor inputs, in addition to the aux input. This added to the great phono stage and legendary tuners that Pioneer was always known for. 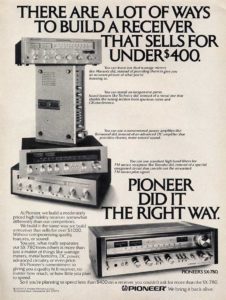 I think that every audiophile needs a vintage system, in addition to their modern two channel or home theater setup, just to keep us grounded to our past, and to the roots of the hobby. It’s amazing what a few Saturday mornings of lost sleep can do for boosting your home collection, if you’re willing to do some fun searching. Happy hunting!