We’re now just a week past the 2019 AXPONA high-end audio show, which took place at the Renaissance Hotel in Schaumburg, IL. What started as a 75-degree week turned into four inches of snow during the weekend of the show, which drastically affected attendance on Sunday. More on that later. 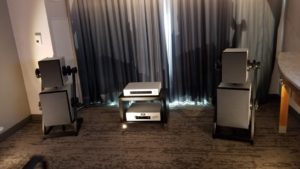 Let me first get into what AXPONA was. Last year, I compared it to going to open houses in rich neighborhoods only to return to your own home dissatisfied with your décor. I’ll break it down more succinctly this year. After visiting hundreds of rooms featuring some of the best hi-fi gear on the market, it was hard not to come home and just want to start completely over. I don’t know if I’ll ever quite escape that feeling.

I discovered a couple things this year, both about audio, and about myself. Regarding audio, I found that there are more bedfellows than I had ever thought, particularly when it comes to the use of cables. I was actually tickled pink when I walked into a vendor’s room and they made a very independent choice in speaker cable. Secondly, I discovered that perhaps I’m becoming a tad jaded. While I heard many systems that I loved, I actually heard a few (which shall remain unmentioned) that I deemed to be almost unlistenable. Some of these unlistenables came with astronomical price tags, to boot. What I found, which came as no surprise, is that there was a small sector of people who were easily impressed by over-emphasized bass. I did my best to be polite in those rooms and excuse myself as quickly as possible. 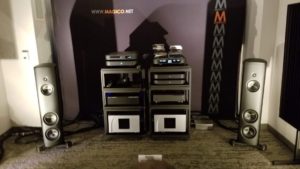 My wife and I got to AXPONA on Friday for just a brief appearance, but it was long enough to pick up our press badges and catch up with our friends at PS Audio. They had one of the most impressive rooms of the entire show and were proudly demonstrating their new speakers- the AN3’s. Considering what we heard, I can plainly see why PS Audio is excited about getting into the speaker market. They were quite impressive. I regret that I was so excited about seeing new gear in there that I didn’t snap any photos.

Saturday was very well attended- almost too crowded- with some rooms being nearly impossible to get into. I started on the 16th floor, joined by my wife, sampling some of the show’s finest offerings. Admittedly, I intentionally started my day with my favorite speakers, the Avantgardes. Avantgarde Audio brought out the Duo Mezzos driven by a stack of Esoteric gear. It was a wonderful way to begin the day. The whole floor was filled with amazing gear, but for us the biggest surprise came from Goldmund. I had no previous experience with their products and was just blown away by their speakers. The imaging and soundstaging that they presented in this small hotel suite was simply incredible. We also got to spend some time with some Magico speakers, which is always a worthwhile experience.

A big surprise, as well, were the open baffle Pure Audio Project Trio 15 Classics. I’ve always been a skeptic about open baffle designs, but these made a believer out of me. A company called Snake River Audio also wowed me with a pair of speaker offerings.

As I worked my way down the floors, I was treated to amazing presentations from Joseph Audio and Stenheim. The unique speakers from Muraudio never cease to put a smile on my face.

I managed to get down to the seventh floor before hunger took over. Grabbing a quick, but over-priced, burrito bowl with my good friend Juan Ayllon from Prairie Audio Man Cave, we began to recap what we had seen so far. 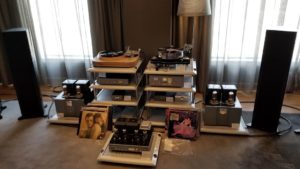 Fast-forward to several more rooms and many more systems, and the fatigue began to set in. There really is only so much that you can take in each day. I was beginning to hit a wall, for sure. However, I managed to get a great visit in with my friends at Parasound. I’ll be publishing my review on the XRM Phono Preamp very soon, so check back for that. They were debuting their soon-to-be-released $1299 integrated amp that had several of us in the room drooling. This piece should be a real player in the market very soon!

Finally, I was able meet up with a group of treasured friends, including writers and manufacturers for a couple beers and some laughs at the end of the day. I think we were all exhausted. We talked about life, Judas Priest concerts, over-priced cables, convertibles and motorcycles, our first marriages, our first systems, and my newly-acquired Vandersteen 2C’s. As we sat there, we continued to say hello to old friends passing by. 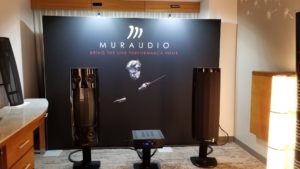 With Sunday came an unexpected April snowstorm. Four inches of wet snow pounded the area, with almost no help from plows or salt trucks all day. Roads were treacherous. The show ended up being a completely different experience. Gone were the crowded rooms. Suddenly I was walking into rooms all by myself, and it made for a completely different feel. Manufacturers were feeling much looser about musical selections, and the mood seemed more intimate and friendly. I found myself having much longer and more engaging conversations with people, sometimes about guitar amps, tube choices, dive bars in Massachusetts, David Bowie, and so much more. Bonds were formed. Friendships were made. 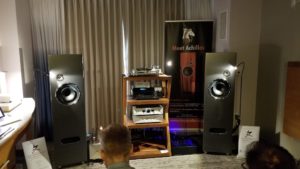 I got to hear the new re-emergence of KLH speakers. While their top-of-the-line towers were great, I really appreciated their bookshelf speakers – reasonably priced, and very nice sounding! On the other end of the spectrum, I really fell hard for the new speakers by Verdant Audio. A similar sized set of bookshelf speakers, but in a completely different price realm, I sat and listened to Bowie’s “Blackstar” and just melted into them. 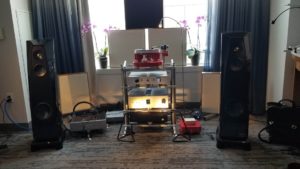 It was thrilling to go into the Western Electric room. Part audio show, part history museum, they get my award for the coolest room of the show. It was getting toward closing time and I regret that I didn’t have more time to spend in there. They were showing of their $7k CD player, which I got to hear briefly. 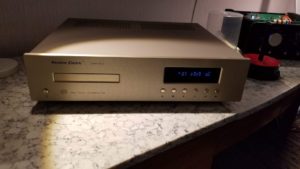 Finally, I strolled into a room where Megadeth was blaring from a set of tower speakers. There was no one in there, and the guy was quick to apologize for the music. I told him no- it was great, and very refreshing after all the jazz I’d been forced to listen to all weekend long. He then asked what I’d like to hear in the room. I was curious about his bookshelf speakers, so he switched to them, and cranked “Symphony of Destruction.” It was a very gratifying way to end the show. Manufacturers, if you’re paying attention, let’s have a little heavy metal every now and then, ok?

What was the overall impact of the show for me? Well, unlike last year, I didn’t come home feeling like everything I owned sucked. I suppose my new Vandersteens helped ease my suffering there. However, I have found that with every show that I attend over the years, I become more set in my ways of what I like and what I don’t. This is probably where I need to be cautious. Yes, I’m preaching to myself here. I think we all do. I met a few real audio snobs, and I certainly don’t want to become one of them. Or, is it too late? Is it too late for all of us? Is there some sort of support group for us? What would that look like? Lousy coffee while someone streams music to a Bluetooth speaker from their phone? Oh, for heaven’s sake. In the meantime, I’ll struggle with finding the humble middle ground, the Shoestring path, and continue to do exactly what I do. Let me know what your thoughts were on the show! 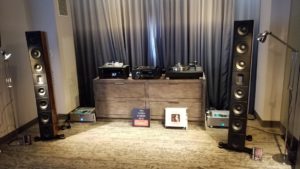