December is a tough month for musician deaths. Of course, most people will instantly think of the assassination of John Lennon. Metalheads still mourn over the losses of Dimebag Darrell Abbott and Lemmy Kilmeister. Yet, it is also the anniversary of the passing of Big Band leader, Glenn Miller. Though there were a few theories and stories surrounding his death, the most accepted is that the carburetor of his plane froze up, causing it to plunge into the English Channel on December 15th, 1944. It was announced on December 24th.

I myself mourned the days that Lennon, Abbott, and Kilmeister all passed. I was fans of them all. But before all of them, I grew up on the big band sound. Though it took me some years to fully appreciate all of it, the big bands found their way into my music library more and more amongst the rock and the metal.

For me, the great leader was always Miller. Though he was often criticized, even posthumously, for being too polished, his music has always spoken to me of America, of a by-gone era, of love, and of times of separation through songs like “Don’t Sit Under the Apple Tree.”

A few months back, as I spied this five-record set called “Second Pressing” at my wife’s parents’ home in Michigan, I humbly asked if I could take it home with me. Released by RCA Victor in 1960, it features a spiral-bound short bio on Miller and his band, and a chronological listing of the 59 tracks featured on the records. This set also came with a Reader’s Digest Association guarantee of quality and satisfaction. 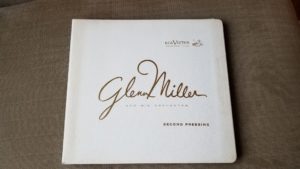 All of the tracks were recorded between April 10, 1939 and September 15, 1942. The fidelity is about what one might expect of recordings from the era, though not the best I’ve ever heard. Some of the songs were recorded for radio broadcast, some for Chesterfield Cigarettes, and featured live audiences and announcements. These are not the same tracks I’m used to hearing on other Miller releases, which is wonderful. Even with the variances in the quality of the recordings, this truly captured the essence of the era. Absolutely priceless.

Then there are some real surprises on this set. Some songs, like “Make Believe,” come through with a lush richness that almost belie the age of the recording. The following track, a 1940 recording of “Say Si Si,” jumps right off the vinyl and into your room. It’s still lively, fun, and timeless.

Side 2 features a fun medley of something old, something new, something borrowed, something blue, recorded live January 24th, 1940. Starting with “Japanese Sandman,” they glide into “What’s the Matter with Me.” Then, they borrow from Benny Goodman’s “Let’s Dance,” and end it with “Blue Room.”

I’m fortunate in that this is a very pristine copy of this set. There is hardly a click or pop as the record spins through track after track. I’m just beginning to digest (pun fully intended) all 10 sides of this incredible collection. I do see that this is still available on the used record market, and at very (almost ridiculously) reasonable prices. If you’re a fan of Glenn Miller’s music, or Big Band in general, this is a great set to add to your collection.