I haven’t talked quite enough about my trip to Florida this February. Indeed, both the Florida Audio Expo in Tampa and the whole trip itself fell between two other significant events and nearly got swallowed up between them. At the time of the show, I was still in the final stages of recovery from pneumonia, a gift I picked on the trip back from Las Vegas to celebrate my 50th birthday in January. I was already beginning to prepare for the AXPONA show in April, as were many manufacturers, writers, and reps. However, the Florida Expo was a show that was not to be missed, and my wife and I desperately needed a respite from the Chicago winter that was drilling the cold into our bones.

Our trip was two-fold, as it also coincided with a close friend’s 50th birthday, as well. I would get to spend time celebrating audio and reveling with great friends in St. Pete. It turned out to be an incredible, well-deserved, three-day weekend for my wife and me.

But I digress… The show! Let’s talk about the show! Well, more specifically, I’m talking about something that stood out for me at the show… but I’ll get to that.

The show was fantastic, fairly well-attended, free, with what I thought were very respectable sounding rooms. I started at the top floor (as they were advising all of us to do) and worked my way down the eight floors of exhibitors.

It was late in the day and I had made it to the lower floors when I walked into the Cyrus Audio room. The One HD integrated amp was being shown with a pair of Q Acoustics towers. So much of what I had seen all day was fantastic, but quite expensive. Now, that makes for a great day of listening, but not a very practical use of my time. Suddenly, here in front of me was this very intriguing $1399 amp. The music in the room wasn’t quite to my taste, however the sound was up to par with rooms I’d been hearing several floors above at much higher price points. My ears perked up, and I spent some quality time in there investigating.

Fast-forward a couple weeks, and my review sample arrived. A very sleek and simple unit, void of a lot of complications. Two knobs- that’s it. I’m reminded of the old joke about martinis and breasts- that one isn’t enough and three are too many. The gloss black front panel and narrow, 9-inch-wide, profile offset the large dials to provide a very elegant look. I was happy before I even had it connected.

Connections were another story. The back panel has a very high-end feel to it. For being a lower priced unit, nothing about the One HD feels cheap or compromised in any way. Once connected into my listening room, the amp didn’t take tremendously long to burn in and feel right at home. In fact, The One became central to me as I swapped some other gear in-and-out for a couple weeks. No matter what speakers I put on it, no matter what player, or cables, I ran into it, it performed just admirably.

When the One HD first arrived, I had a pair of Mission 775 speakers connected to it, but very soon after, I acquired a set of Vandersteen 2Cs. I did most of my listening with those. The robust 100wpc output of the One HD drove the ‘Steens just fine, which isn’t all that easy to do. Most of my source material came from my go-to Pioneer Elite DV-45a SACD player. However, along the way, a few other things did get swapped in-and-out. As I’m about to pack the unit up, it is serving duty burning in a beautiful pair of LSA bookshelf speakers to be reviewed soon. There’s just nothing this amp won’t do well.

So, let’s get to that. As I stated, the majority of my listening came from SACD. During my time with this amp, I picked up a copy of the Rolling Stones “Let it Bleed” on SACD, and practically wore it out. I’m pretty certain my wife is sick of hearing it by now. I’m not usually one to over-play a single disc like that, but the classic 1969 release became a very fun album to immerse myself into with this setup. There’s a real clarity and depth to the One HD, and a beauty to the way it drives a pair of speakers. 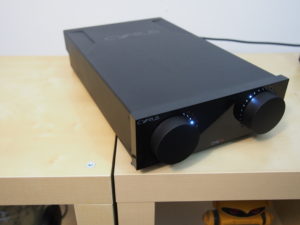 I did run a bevy of other discs through it, as well. My usual SACD demo of Miles Davis “Kind of Blue” was equally clear with tons of headroom, regardless of what speakers it was driving. The sleek little amp performed very well with standard CDs, too, as I played stacks of them. The Cyrus never appeared to break a sweat.

What else will it do, though?

One of the first things I noticed about the One HD when I saw it in Florida was… oh yes… the phono input! Once getting my review unit, I couldn’t wait very long before fetching my Rotel turntable and giving this a test. What I found was a very nice phono stage. Spinning the classic album from Rickie Lee Jones, I was again impressed by the amp’s clarity, but here it didn’t have as much separation as it did with the CDs. However, if you’re a record lover, as I am, and looking for a one component solution, The One HD is now another great choice to examine! 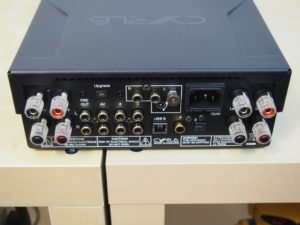 At first, my CD listening was analog, but this model has a built-in DAC with two digital inputs. I utilized the coaxial input and reached for Robert Plant’s “Carry Fire” release. Immediately, I was greeted with a very clear and transparent DAC. Again, for a lower-priced unit, Cyrus has really put a tremendous effort into this amplifier. Deep, punchy, beautiful… these were just some of the first adjectives that began to flow through my mind and the ones and zeros started to run.

The One HD does offer Bluetooth pairing, though despite my best efforts, I was never able to get it to properly pair up with my Samsung Galaxy S8+. You will probably have different results, and I would not let that sway you.

To sum it all up, there were a few things that we brought back from Florida- some shells, sand in our flip flops, amazing memories, reddened skin, and the chance to review a simply incredible little integrated amplifier. It sits at a very nice price point, would look amazing in your system, and will effectively drive nearly anything you have.

2 thoughts on “Is This Truly The One?- Cyrus Audio The One HD Integrated Amplifier”