This last Saturday was a rather rough day. Roofing contractors were working in my neighborhood, got the wrong address, and mistakenly began tearing the roof off my house. I awoke at 7:25 am to people ripping holes right above my bedroom. It was only a 4 year old roof. Now, they have since come back, and done a marvelous job repairing their damages, but let me tell you, it made for a stressful day. 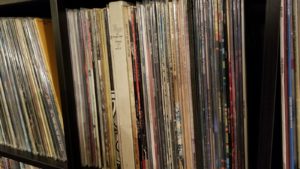 To comfort me, a couple groups of good friends came by with two of my favorite things, craft beer and records to play. Since my blog isn’t about craft beer (though I could I go on and on about how I love that, too), I’m going to stick to why I love these wonderful round discs of music.

Is it the sound quality? It’s true, the fidelity is often times much better than that of a CD, and is always far superior to that of an mp3 or streaming audio. Even through some clicks and pops, surface noise, and some occasional static, it’s still a better sonic experience. But, am I sitting there each time, marveling at how incredible each record sounds? Well, sometimes, but not usually. There are a few times where I just can’t help but be pulled in by the sheer quality of the experience, but not that often. My Pro-Ject One turntable, with its Oyster cartridge has certainly spoiled me, even for being a somewhat entry-level table.

So, is it the novelty? That seems to be what has drawn so many people to vinyl. For me, unequivocally not. Records have been with me since day one, and have never been some kitschy thing I picked up to impress my friends. I’ve never bought a little Crosley tabletop record player, nor would I, but have always had a quality turntable.

Is it nostalgia? That would suggest that I’m stuck in a bygone era. Hardly. I still buy newer releases on vinyl, as well as older records, too. It’s certainly not that. I have both newer and vintage turntables in similarly newer and vintage systems. I can relive the past, should I choose, but my technology is also decidedly modern.

So what exactly is it then?

I’ve come to realize that it is truly the tactile feel of playing a record that keeps me doing it. Part of the reason that we, as audiophiles, invest so much into our systems is for the realism of the music. We want to get as close to the live or studio experience as possible. Having that platter in front of me, turning at a comforting 33-and-a-third RPM also keeps the music in the same room as me. A CD slips into a drawer and disappears, spinning at hundreds of revolutions per minute. Streaming audio comes from the cloud. That’s just voodoo. Vinyl is there with me, in the room, bringing me the music, in person- so to speak. Its flaws- pops, clicks, even the skips, etc.- only serve to remind me how much more human the experience really is, and that keeps bringing it home even more. The added fidelity, the lack of digital jitter, the analog warmth, are all just added bonuses to enhance the experience and make it what it is.

What we begin to pour into it, in things like high-end cables, isolating pads, cork mats, and all the other accoutrements that go into making this an expensive hobby (people are shocked when I tell them you can spend over $100,000 on a turntable) just make it our own personal journey with the turntable.

If the CD is truly dead, which I don’t believe that it is, its demise can only be blamed on its lack of humanism that vinyl has always had. I think that people are beginning to reconnect with the human aspect to records in the same way that I always have because of the inhuman nature of the download. Music, even in the recorded sense, has always been something we have been meant to connect with; as we have lost that in recent years, it has only been natural for there to be some sort of clamoring for a tactile reconnection with it.

The ebb-and-flow of our relationship with media formats through the years has led us back to vinyl, and the album itself as a real thing. People need something to hold. That feeling never really left me. I’ve always needed that album cover to look at. The artwork of an album cover used to carry such heavy weight, and with the advent of the 5” CD, began to lose some of that workspace and artistic expression. Once people began downloading music, suddenly, there was no album cover. Where was the art? I think we know that the art will always prevail somehow, and album covers are showing up on new vinyl, CDs, and the screens of media servers. However, there’s still the inner sleeve, poster, gatefold, and any other surprise one might find inside that beautiful record.

And that for me, is why they’ll never go out of style.

1 thought on “Why Do I Listen To Records?”