The weather is once again turning cold here in the Chicagoland area. As it does, our weekend evening activities turn away from nights around the firepit outside and downstairs to the bar area for what we call “pub nights.”

Normally, Amy and I eat fairly healthy meals. I do quite a bit of the cooking, which means I grill a lot- chicken, leaner sausages, etc., and we supplement them with vegetables and salads. Amy is a fantastic cook in her own right, but her work schedule is far more demanding, so the tongs often fall into my hands. However, on occasion, sometimes we have to indulge our inner junk food cravings and throw trays of delicious/horrible things like mozzarella sticks, pizza rolls, chicken wings, and other such delicacies in the oven and go to town. Then, out comes the craft beer and/or the Moscow mules. Did you expect any less?

The Christmas after we bought our new house, Amy presented me with this small box. I opened it with the usual excitement that comes with the “big things come in small packages” anticipation. Inside were a pair of old keys. I held them up and looked at her quizzically.

“These are the keys to your new bar.” She said. Now, as a friend of mine had just purchased and opened a tavern of his own in Wisconsin, my mind instantly went there, and a flash of panic went coursing through me. This seemed like crazy impulsive irresponsibility, but a whole lotta fun. Sure, why not. Can we go see it? The moment was fleeting, and I came to my senses, realizing this was Amy. This had to be something more reasonable.

She went on to explain that she had bought me an antique dry bar for the basement while she was visiting her parents a month earlier. It was currently hiding (in plain sight) at a friend of ours’ house. In fact, I had walked right past it days earlier, completely unaware. Thus, our pub area in the basement was born. 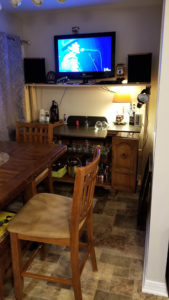 It’s a tiny area, just over six feet wide and eight feet deep, but is open on two sides. The bar fit in perfectly. I built a shelf for a small TV and a pair of speakers to reside over it.

My choice in gear was obvious and easy for this room. I had recently been gifted some amazing vintage gear by a couple different generous parties. The results were far beyond expectations.

The receiver was a gift from friends Jill and Ken. It was actually part of Ken’s parents’ stereo system, all of which I inherited. Other pieces in that system have become somewhat of a labor of love for me, and hopefully soon I’ll be reporting on more of those.

The Marantz has a clean, powerful sound to it that is always smooth, but instantly brings you back to that vintage era. The 2270 is probably the most common model of Marantz receiver that I see, and may not be as sought after as some, but for me exemplifies the reason these are so classic. The silver face (complete with original plastic cover), the highly functional layout, the blue glow of the lights, the wood case, all harken back to the glory days of hi-fi. 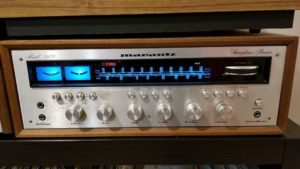 I use a Sony ES CD changer as my main listening source down here, and the Marantz takes to it very well. I wouldn’t mind putting a dedicated turntable onto one of its two phono inputs in the future. In the meantime, I’m quite pleased, though.

The beauty of the 2270 is that it sounds so amazing purely flat. No adjustment to the bass, treble, or midrange is ever necessary. I’ve driven a few different sets of speakers with it and it has shined, no matter what I’ve connected it to. Which leads me to its final destination…

The Spicas were a gift from my wife’s aunt Pam. Pam came to visit us just after we moved into the new house, and as she walked into the house, she smiled slyly at me and said, “I have things for you.” I knew exactly what she meant. Since I met her a few years back, she had been talking about some vintage gear she had around, wondering if I had use for it. She realized that not only did I have use for it, but I had the proper appreciation for it.

In her trunk were the Spicas, still in their original box, and a Dynakit 70 tube amp. I wondered to myself how much her gas mileage suffered hauling that amp here from Boston.

To be honest, I wasn’t familiar with Spica before this and quickly found that not many others were either. There was limited information on the Internet, but what I could find looked fantastic. It would be up to me to do a lot of my own discovery here. 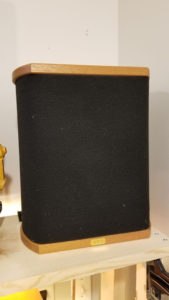 Discover, I did. What I found is that these may be some of the most under-rated speakers of their time. Quote me on that.

Let me go back to the fact that this not a large space here. Like a walk-in closet with booze. The Spicas do absolute magic in here. Even with less-than-ideal placement, they make this space sound enormous. They actually make me feel like I’m under-utilizing them, but this is absolutely right where I want them right now. The guilt I feel there very quickly gets replaced by great satisfaction as the Marantz and Spicas work in tandem to produce a huge, yet very tight sound.

I have added a small subwoofer in-line. The Spicas are tight and punchy, with clear and defined bass from the 6.5” woofer in an acoustic suspension design, but not terribly deep lows. I added an Aura sub that I picked up a few years back, crossing it over pretty low (about 60hz), letting the satellites do most of the work. The 1” soft dome tweeter is one of the most detailed drivers I’ve heard from a speaker of this era, and certainly of this price point. 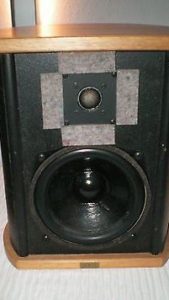 Something about these speakers pulls me to listen to a lot of Tom Petty. I think it’s the detail in the guitar, the depth in the voice, and realism. Ever since his untimely death last year, these speakers just make me feel like I’m sitting here at my table having a beer with him. There are just pieces of gear that connect you with the music better than others, and these do it for me.

The Generosity of Others

Some of my favorite pieces of gear have been gifts from others. In fact, I think back to my first stereo as a kid, and it was largely components given to me by my grandfather. The Marantz and the Spicas have truly become prized possessions, and while their purpose in our house is somewhat unique, it doesn’t diminish their value in the least.

Sometimes, when people know that we are hi-fi nuts they will impart speakers and receivers and such to us that they know we can show more appreciation to than they can. I’m completely ok with that. I’ve been able to make use of pieces that were just gathering dust in other homes. This gear is meant to be used and cherished, but all too often ends up in Goodwills, landfills, or dumpsters. Or sometimes, the gift is just out of love and appreciation from people that know we can get the value out the components that they might be able to.