In the June 2018 issue of Stereophile Magazine, writer Ken Micallef reviewed the Klipsch Heresy III loudspeakers, and had some rather interesting things to say about them. He called them “fat little floorstanders” and “party speakers.” Moreover, he stated that these were not audiophile speakers. I really enjoyed his article, as I usually do with his writings, but after I read this, I just sort of reflected for a moment… and then went and fired up my own beloved set of fat lil’ Heresys.

My set of Heresys’ story goes back about 10 years ago when I was at a garage sale one morning (I love garage sales, and should really hit them more often than I do). At this particular one, I wasn’t finding much… lots of pots and pans, pottery, knick knacks- silly yard sale fare. But, I walked further back into the garage area, and I could’ve almost missed them… under a rack of clothes… on the floor… there they were- a pair of 1978 Klipsch Heresys. There was a piece of masking tape with the price of $15 on them. I immediately found the woman running the sale and purchased them. My hands were shaking as I pulled the money from my wallet. I was in such a rush to get these into my car that I nearly tripped on the sidewalk and fell on my face with the first speaker. Careful, Michael!

I got them home, set them up in my guest room with my Pioneer SX-780 (which they have been paired with ever since), and fired them up. The cabinets were just a little rough, but every driver came to life perfectly. I had truly scored! 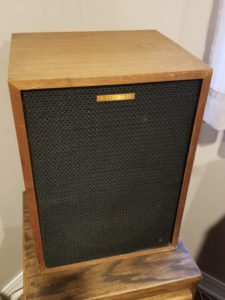 I have enjoyed them ever since. There really is no other speaker quite like the Heresy. So, to the earlier point- are they or aren’t they an audiophile speaker? Are they just a party speaker? I think this boils down to what kind of an audiophile you really are. The thing about the Heresys, as pointed out in the Stereophile article, is that they are fast speakers. Now, does fast equal accurate? Not necessarily. Every speaker has a flavor, regardless of what anyone will tell you, and these definitely have a flavor. Maybe their flavor is “party flavor” after all, but if that’s the case, this is one hell of a party.

The voice (flavor) of the Heresy is absolutely a very forward one. There is no mistaking the horn-loaded sound. Yet, the acoustic suspension (some have argued infinite baffle) design does make the bass a bit more subtle and tight than other Klipsch products. For that reason, many Heresy owners choose to couple them with a subwoofer. I do. I’ve experimented with several. Currently, I’m using them with a passive sub, and am quite happy. They don’t need much help in the low end, just a little. Their 99dB sensitivity rating means they really make the most out of the 50 watts per channel that the Pioneer sends them. Yes, these really will get loud. Party loud.

Back to the Heresys not being audiophile speakers… how do we define what an audiophile product is? The Heresys will bring out things in recordings you just won’t hear with other speakers. There are details, subtleties, and elements that they bring out in the soundstage that are unique to only them. How is that not an audiophile product? Speaking of soundstage, when properly placed, they have amazing imaging that is very tough to duplicate. Now, for me, I choose to elevate them on stands about 24” and fire them straight at me. Many people choose to keep them on the floor and use angled risers. Your choice.

The simple fact that these speakers have been in production continuously since 1957 speaks volumes about what they are, and their place in our audiophile history. Yes, they’ve been revised a couple times, and that’s a great thing, but I’m quite thrilled with my originals. They never disappoint me, no matter what I listen to on them. As I started writing this, I was listening to Tom Petty’s “Damn the Torpedoes” album and enjoying the speed and immediacy in all the instruments. I’ve now switched over to the self-titled album by Them Crooked Vultures just to immerse myself in the lushness of this album. There are lots of those little details in this record like I mentioned, perfect for the Heresys to bring out front. The dynamics on this album also makes every track an absolute playground for these speakers. 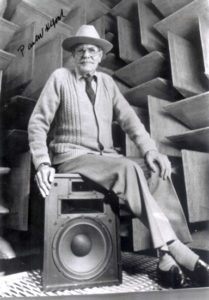 The history of the Klipsch Heresy is rich. It was originally introduced in ’57 as a center channel speaker to go between two Klipschorns in larger rooms. When Paul Klipsch came up with the idea and the design, people told him he couldn’t do it, that it was acoustic heresy. “The hell I can’t,” he said, “and that’s exactly what I’m going to call it.”  The resulting Heresy was a 3-way, acoustic suspension (sealed) design with a horn tweeter, horn midrange, and a 12” accordion surround woofer. The design has remained largely intact ever since, which has been wonderful to see. Current specs list frequency response as 58-20,000hz, and I’m pretty sure my originals are very similar, even though the woofer is what has been revised in the newer design.

No matter what other set of speakers you run, these are always great speakers to have in any room. A rec room, perhaps. Wait, does that make them party speakers?  Did I just agree? To a certain extent, I guess I did. Can we have a new term- party audiophile? I think both worlds can co-exist in wonderful harmony. Happy hunting.

20 thoughts on “My Hands Were Shaking- 1978 Klipsch Heresy Loudspeakers”