I guess I didn’t really need a new set of speakers. We’ve all been there. We don’t need them, but then, they just appear. I was running a system in my master bedroom and was quite content with the Wharfedale Pacifics connected to it. They were lovely. But, had it gone no further, this would’ve been a much shorter story…

On my daily cruising of the local online garage sale sites, there they were- a simply beautiful pair of oak Mission 775 towers. At the time, I really had never even auditioned Mission speakers much at all, just knew of their renowned quality, and English sound. I do really love English speakers. There’s just something very pleasing about the sound of them.

I contacted the seller, and we agreed on a ridiculously low sum of $125. I told them I would be getting them after taking my significant other, Amy, to dinner. At dinner, I told Amy that we’d be picking these up afterwards, hoping she wouldn’t instantly roll her eyes at me, thinking “another pair of speakers?” Instead, she was somewhat irritated, and wanted to know why we didn’t nab the speakers before dinner. Guys, I did well when I met Amy.

We arrived at the house to meet a husband and wife in their very lovely home. He explained that she wanted to downsize things in the room and had asked him to sell his beloved speakers. My heart instantly sank. I felt like I was stealing these away from him suddenly. His wife walked away with Amy as they discussed some décor ideas. I quietly offered to let him out of this deal. If he really didn’t want to do this at this point, I wasn’t going to hold him to it. He had very sad eyes, but said no, the speakers were now mine. We chatted about audio for a little while longer. I finally said, “I’m going to reach for my wallet now, but I really want to give you this one more chance to change you mind about this.” He smiled, and shook his head. He offered to help me load the speakers into the car. After bringing them home, I contacted the seller, and offered them a one-week period to change their mind back.

The rest is history. They’ve been mine now for over a year, and I enjoy them whenever I get the chance. I’ve since added the matching subwoofer (see part 2), as the system I have really calls for it.

I use a Yamaha CD changer as my source, into an all tube system. An Antique Sound Labs tube preamp feeds a pair of matching Antique Sound Labs 8 watt monoblock amplifiers. These flow out through XLO speaker cables to the Mission 70ASA sub, through two more XLO cables, finally to the 775s.

The sound couldn’t be more divine. When demoing the system, I like to start with Fleetwood Mac’s “Rhiannon.” You hear so much detail in Stevie Nicks’ voice that you can actually hear that her throat was dry in this take. Lindsay Buckingham’s guitar has incredible depth. 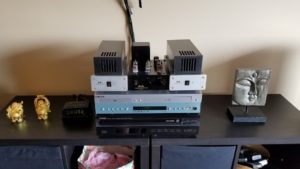 Onto Foreigner’s “Starrider.” Why? Because these speakers do 12 string guitars like no others, and this small sub just pounds when the music crescendos. It’s my big guilty pleasure when listening to these towers.

Where the 775s truly blow people away, and where I’ll go for most demos, is to “Hotel California” from the Eagles “Hell Freezes Over” live album. Here, it’s not just the acoustic guitar, but the drums… oh, the depth in the drums! They practically come from the next room. The dual 6.5” woofers in these really wake up and bring every detail forward. The tweeters in these don’t miss a detail. The soundstage brings the feel on the audience in the room to life. Simply amazing.

Part 2- This Just Fell Into My Lap- Mission 70ASA Subwoofer

No more than a month after having the Mission towers in possession, my daily online shopping brought me into a huge buyout of someone’s gear, some of which I kept, some of which I sold on to recover my costs. One of the items that brought me to the treasure was the Mission sub. I was able to buy everything out so well that, by the time all was said and done, the sub cost me about fifteen dollars. Since the monoblock amps are only 8 watts, and aren’t able to push the towers as hard as I’d like, the sub was an instant blessing. It provided a great deal of low-end “oomph” that was lacking, without being overwhelming or boomy.

This would certainly make a great sub in a home theater, which is what it was designed for, but for my purposes, it has been absolutely perfect. Ported, with an 8” driver, this 100 watt powered unit certainly stands up with anything else I’ve heard in it’s class. It’s musical, tight, and powerful. Everything you could want. What it isn’t is huffy or flubby, which is wonderful. So many people pass on 8” subs, but I have a couple that am really very into, this being one of them.

So, again this falls under “I didn’t really need a new set of speakers…” but you know how it goes. I found these just a week ago for the astounding price of 50 bucks. I couldn’t make the offer fast enough. In fact, someone else had beaten me to it, but had actually blown the seller off that day! The speakers were mine for the taking, but were several towns over; the seller was kind enough to hold onto them for me for a couple days, which astounded me. Some sellers can be very kind.

I bought the speakers with the hope that they would be a perfect match to the 775s. When I got them home, I realized that they weren’t. The 775s are oak, and these are a light birch finish. In the same room, you might not even notice. Should I ever match them into a new system someday, all I would now need is the center channel. For the moment, thought, they’re on their own in my little sub/sat system in the basement. 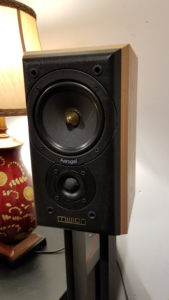 I wrote recently about small speakers blowing me away. These really take the cake on this. The instant I heard them, I was thoroughly moved. I brought Amy down right away, so she could hear them too. “You can never sell these,” was her response. She was first taken by their physical beauty, and wanted to commandeer them for sound in the dining room, but changed her mind, and decided to graciously let me keep them. She was most blown away with their imaging, as was I. The way these little speakers place instruments in the room is stupendous.

Right now, I’m listening to a borrowed Larry Coryell Organ Trio CD (one which I’m going to have a hard time giving back to my friend!), and the distinction in the three musicians is outstanding. There isn’t a hint of muddying or smearing out of these 4.5” woofers. The tweeters are the same amazing ones as in the 775s. I do have them matched up with my Canton sub, but only very lightly. The Missions are doing the vast majority of the work here. This is a very live recording, with just a few mics in the room, and they pick up various noises, which are being reproduced absolutely accurately. I’m not missing a beat in this disc, and it’s incredible. There are places where I can hear Larry’s pick hitting the strings. These are small speakers, at a mild volume, in a room that would hardly be anyone’s dream listening space but mine.

This just might be the best 50 dollars I’ve ever spent, seriously. It’s proof that the bargains really are out there if you’re willing to shop for them every day. Happy hunting, everyone.

7 thoughts on “I Gave Him Three Chances- Mission 775 Loudspeakers”