I live in a house of “his” and “hers,” but it was the easiest way for a couple who met in their forties to make cohabitation work best. Blending possessions is a young person’s game. As part of our coming-together arrangement, we purchased a house that would give us enough individual space to have our own retreats, sanctuaries, and places for our “stuff.”

Years ago, when Amy finally agreed to go on that first date with me, something that only took place after months of courting her, it was decided that I would pick her up from her apartment. I was terribly nervous. I knew some things about her, but there were still so many questions. How would this girl appreciate my interests and hobbies? Would she be ok with me being a musician, audiophile, and music collector? Would she even have the slightest appreciation for such nonsense?

I arrived that June day, climbed the stairs to her second-floor condo, and knocked on the door. She had a very nervous smile and invited me in. Her apartment was meticulous, which didn’t surprise me in the least. It was well-decorated and could have appeared in a magazine. Completely adorable. What did surprise me and what caught my immediate attention was that she actually owned a stereo system! Not just some small shelf set up, but a prominently displayed, real hi-fi set up. I couldn’t help but drift right over and begin to look at what she had. I was busted immediately for my gawking, and she started explaining her system to me.

A Denon receiver powered a set of Bose 701 Series II towers, complimented simply by a Sony CD player. Simple, but quite effective, and far beyond what many people are running in their living rooms these days. 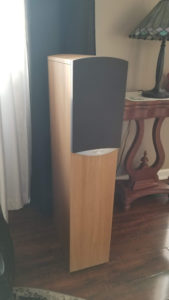 Our date started with dinner and then turned into a long walk through a forest preserve. That walk became a lengthy discussion about our musical tastes, musical influences of our grandparents, our CD collections, and even Amy’s recent adventures shopping for speaker wire. From that point on, we became an inseparable couple, eventually joining households and marrying.

Our households joined, but our systems never did. Her system still has its own place in its own listening room, as it should. Eventually, her Sony CD unit died and I replaced it with a Yamaha CD changer and added a Pioneer cassette deck so that she could listen to old “Jazz with Dick Buckley” NPR radio broadcasts she had recorded from many years ago. Her system is still one we enjoy listening to among the others in the house.

Bose is a tricky four-letter word. Mention it in any audiophile setting or on any Facebook page, and the reactions will be swift and sharp. People either love them or hate them. There will be no lukewarm response. One can always expect the usual retorts of “No highs, no lows, must be Bose” and “They’re a marketing company that makes speakers.” Then there will be the rabid fans of the venerable 901 speakers crying out in defense.

I must admit that I have spent most of my life in the haters camp. I have a difficult time enjoying certain products in the Bose line. I don’t care for the sound of the little cube systems, no matter how well someone thinks they have them set up. The Acousimass subwoofers just sound thin and huffy to me. Some of the smaller speakers bother my ears, especially when played loudly in bars. My exception to the small speakers came when I picked up a pair of Model 21 (Interaudio) bookshelf speakers about a year ago. If you ever get the chance, grab yourself a set of those. I have since bestowed those upon my nephew as part of his first stereo system. 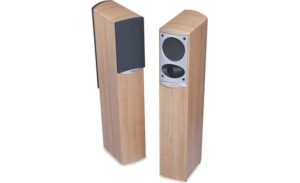 So why am I writing about Amy’s speakers? Because, quite frankly, there’s something really quite wonderful about them, and… there’s a rare privilege in being a guy with an audiophile wife.

Amy is very particular about sound and has wonderfully discriminating tastes. Each time we have moved, she has set up her system herself, measuring where her speakers go for proper reflection and distance. Once, I kicked the treble up on the Denon to reflect my own taste, just to see if I could get a little more sparkle out of the Bose. She noticed right away and I got a strong reprimanding.

Under a lot of circumstances, I find speakers with built-in powered subs to sound artificial and forced.  To the contrary, the low end of the 701s is very smooth with no spike or bump in the bass, no matter what kind of music you play through them. I just picked up this older disc an audiophile friend turned me onto- Stanley Clarke, Al Di Meola, and Jean-Luc Ponty’s “Rite of Strings.” As soon as I heard it, I knew Stanley Clarke’s bass was going to sound great through these speakers.

While they might not always have as much sparkle as I’d like, they are one of the most expansive sounding speakers I’ve ever listened to. They sit in a large room and tend to make short work of this space. Other speakers would have been swallowed up by this room, which used to house a grand piano before we bought the house. A small pair of bookshelf speakers just wouldn’t have worked in here. The 701s take full command of the expansiveness and never get lost in the environment.

Right now, I am listening to an Adam Ezra acoustic disc. The way the music is filling the room speaks volumes to what the 701s do best. There is great detail in Adam’s guitar and I can hear every detail in his voice. The way his right hand is strumming and slapping the strings comes through perfectly. The experience is above everything… enjoyable.

Before you’re so quick to disrespect Bose, as I have been in the past, try to get in front of a set of properly set up 701 Series II speakers. I see them on the market every once in a while. See if they won’t change your mind, as well.